The X Files (also known as The X Files Movie and The X Files: Fight the Future) is a film released in 1998. The UK VHS was released by 20th Century Studios Home Entertainment in 1999 (In both pan and scan and widescreen with extended footage and a making of documentary) This film takes place between the events of season 5 and season 6 of the X files TV series. There was a sequel called The X Files I Want to Believe released in 2008

Thirty-seven thousand years ago, a deadly secret was buried in a cave in Texas. Now the secret has been unleashed. And its discovery may mean the end of all humanity.
When a terrorist bomb destroys a building in Dallas, Texas, FBI Agents Fox Mulder (David Duchovny) and Dana Scully Gillian Anderson) are drawn into a dangerous conspiracy surpassing anything they’ve ever encountered. With the dubious assistance of a paranoid doctor Prior Academy Award winner Martin Landau), Mulder and Scully risk their careers and their lives to hunt down a deadly virus which may be extraterrestrial in origin - and could destroy all life on earth. Their pursuit of truth pits them against the mysterious Syndicate, powerful men who will stop at nothing to keep their secrets safe, leading the agents from a cave in Texas, to the halls of the FBI, and finally to a secret installation in Antarctica which holds the greatest secret of all.

Documentary Coming Up After the Film

Start of the film (in Pan and Scan 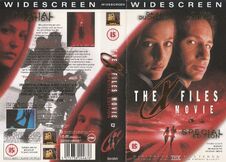