The X Files: The Secrets of the X Files is a recap of season 2 of the American Sci Fi TV programme the X files. It was originally released on the 25th March 1996 as part of the limited edition "X Files forensic evidence box" which was designed to hold the first 4 videos in The X Files file series.

There was a follow up for season 3 called “More secrets of the X files” which was sold as part of the follow up forensic evidence box designed to hold the next 4 videos in the series. Both programmes are available as bonus features in the DVD and Blu Ray releases of season 9.

Strange things happen every day, events that demand investigation. Some defy logic, others are too fantastic to be believed. But most disturbing of all are those incidents too dangerous to be revealed.

This special X-File investigation exposes the dark web of government intrigue encountered by Special Agents Fox Mulder (David Duchovny) and Dana Scully (Gillian Anderson) as they seek the truth behind unexplained phenomena. The closer they get to it, the more dangerous their mission becomes.

Have we encountered alien life forms? Is there a government within the government controlling our every move? The Secrets of the X-Files will initiate you into the search for the truth behind these and other questions. The Truth Is Out There. Trust No One.

Trailers for the first 4 videos in the file series 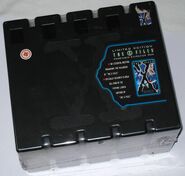 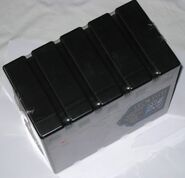 Clicking on this will take you to the opening on Archive.org
[]