The X Files File 6 Master Plan is the sixth video in the file series for the American Sci Fi TV programme The X Files in which certain 2 or 3 part episodes were edited into a movie type format. It was originally released in 1996. This particular video edited together the episodes "Talitha Cumi" (Final episode of season 3) and "Herrenvolk" (First episode of season 4) the title refers to the Master Plan for Colonisation mentioned several times in the episodes

This along with File 1 The Unopened File, File 2 Tooms, File 3 Abduction, File 5 82517 and File 7 Tunguska were also released on Laserdisc.

After a maniacal gunman opens fire in a crowded restaurant, a mysterious man miraculously heals the victims, then disappears without a trace. When special agent Fox Mulder's (David Duchovny) mother suffers a life-threatening stroke, he and his partner, Dana Scully (Gillian Anderson) track down the unearthly healer. It is then, that an even more incredible mystery begins to unravel.

As Mulder and Scully search for more clues, they're pursued by a ruthless alien bounty hunter who will stop at nothing to keep a shocking secret hidden...but who also may hold the key to saving Mulder's dying mother.

In "Master Plan“, Mulder and Scully find themselves one step closer to the truth. 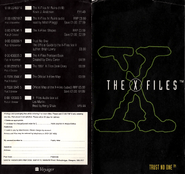 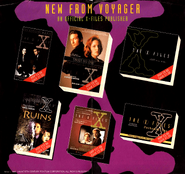